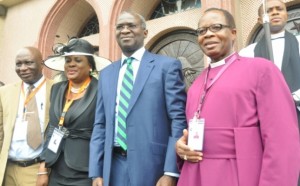 Lagos State Governor Babatunde Fashola has urged Nigerians to appreciate the efforts of the security agencies to curtail crime and maintain internal security in the country.

Fashola who said this during the 32nd synod of Anglican Diocese of Lagos at Our Saviour’s Church, Tafawa Balewa Square, Lagos, described insecurity as the greatest challenge facing the country.

“There is need for Nigerians to show care and concern to our security agencies because people no longer die of diseases but by acts of violence, which showed that insecurity was the current biggest challenge of the country.

“Security agencies in the country lack some basic tools to carry out their duties and they do not get maximum cooperation and care from the public.

“These security agents are humans and need to be treated as such.”

Fashola urged Nigerians to reflect on the state of the nation and how to contribute to the development and progress of the country, adding that the problem of insecurity in the country could only be checked if Nigerians continue to live peacefully with one another irrespective of their religious background.