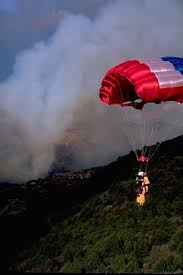 A team of smokejumpers parachuting into a fire in the mountains of Southern Oregon landed in an illegal marijuana garden being prepared for growing season.

The six smokejumpers from a base in Redmond found the site Monday evening, when there was a rash of lightning strikes.

Carlson says the site near the community of Applegate was being cultivated by growers for Mexican drug gangs, and it’s been used before.

She says the smokejumpers saw some people but weren’t sure whether they were pot growers, so no one was arrested.

The smokejumpers extinguished the fire after it burned less than an acre.