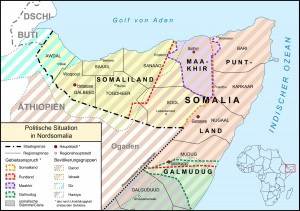 Somaliland is marking 22 years of self-declared independence from Somalia, despite still waiting for the world to recognise the region as a country.

Celebrations were held in the capital, Hargeisa, on Saturday, with people holding rallies, waving flags from their vehicles and staging shows in various stadiums.

Somaliland, which is more tribally homogeneous than the rest of Somalia, has been striving for international recognition since it broke away in 1991.

Despite Somalia’s calls to be united with the region, Somaliland is determined to retain its independence, Ahmed Mahamoud Silany, according the region’s president.

The UN and the African Union have both rejected calls to recognise Somaliland.

Having escaped decades of conflict in Somalia, Somaliland, which sits on the Gulf of Aden, employs its own security and police forces, justice system and currency.

It has a reputation for successfully maintaining law and order for its population of 3.5 million. However, Somaliland’s growth has been stunted as it is not recognised as a state, which makes it ineligible for international development loans.