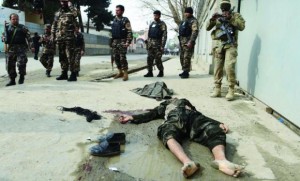 At least 15 people have been killed and 37 others injured after a suicide bomber attacked a convoy of foreign military vehicles in Kabul, police said.

Two children were killed in the blast that injured many others on the way to school, officials said.

“There are casualties. About 10 houses were severely damaged.”

Kabul Deputy Police Chief Daud Amin said it was difficult to count the dead because the blast had shredded many of the victims.

“We saw two dead bodies of children on the ground,” Amin said. “But the rest of the bodies were scattered in pieces around.”

One NATO sports utility vehicle was completely destroyed in the blast and surrounding streets were cordoned off as US troops arrived at the scene.

Kabul provincial police spokesman Hashmad Stanakzi said the suicide bomber had attacked a convoy of “foreign advisers” with a car packed with explosives.

The Hezb-e-Islami group, allied with the Taliban, claimed responsibility for the attack. Thursday’s attack was the second in eight months claimed by the group.

A spokesman for the militants told Reuters that US military advisers were the targets.

The last major blast in Kabul was on March 9 when a suicide bomber on a bicycle killed nine people outside the defence ministry during a visit to the city by US Defence Secretary Chuck Hagel.

The Taliban launched their annual “spring offensive” on April 27, opening a crucial period for Afghanistan as its security forces take the lead in offensives against the fighters.

All NATO combat missions will finish by the end of next year and the 100,000 foreign troops deployed across Afghanistan have already begun to withdraw from the country. What remains to be seen is if the Afghanistan security forces will be able to cope without foreign help.