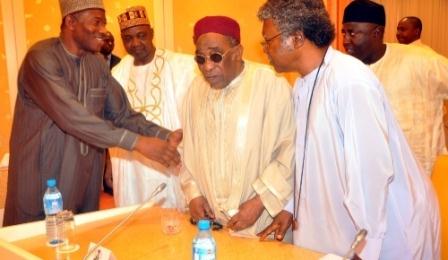 Professor Ango Abdullahi has emphatically declared that voting for President Goodluck Jonathan in 2011 was a political blunder that must not be repeated by the North in 2015.

The former Vice-Chancellor of the Ahmadu Bello University, Zaria made his stance known on Tuesday in Maiduguri when prominent northern elders under the aegis of the Northern Elders Forum (NEF), visited Borno State over the recent Baga military/insurgents clash.

Prof. Abdullahi, who who led a delegation of Northern elders to the state said their forum would soon drag President Goodluck Jonathan before the International Court of Justice over the recent killings in Baga in which the death of 185 civilians were blamed on Nigerian troops in the Multinational Joint Task Force in Baga Town.

Speaking on behalf of the forum’s leader, Alhaji Maitama Sule who could not make the trip, Prof. Abdullahi warned that “the north must not repeat the stupid mistake they made in 2011 by voting President Jonathan against their own interest.”

“The north has serious challenges ahead of it, and this may be what will determine the stake of the north, particularly in the political year nearer to us – the 2015. And we in the forum believe that any discussion that will not lead us in bringing power to the north in 2015 is not of interest for us. We will not be wasting our time on anything other than recouping what we have thrown away in 2015. It was sad that northerners threw away what is correctly their own.

“We know where the lapses are, and we are going to tackle you the governors on that. We know that what happened to us was a connivance which can be squarely put on the tables of the governors of the northern states,” he said,

Going down memory lane on his time as one of the 10 Nigerians that started the PDP but had to leave when the party began to derail some ten years ago, the bespectacled don said:

“I was a founding member of the PDP before I left; and I can tell you convincingly that we are sure of victory because we have the population, we have the delegates and everything that will ensure that the right of the north is respected in an arrangement that was very clear.

“I was part of those that agreed that the presidency be zoned to the south; and I was part of those who determined where it should start. And that was part of my crime for which I kept on asking God for forgiveness and apology for the people of the north. That was how we allowed Obasanjo, who came and decided to deal with us; and he dealt with us very well. For us to get our right turn back, it is going to take a huge effort, which remains the challenge before us and all the state governors,” he added.

He further noted that the northern leaders have not decided on which party or candidate to support for 2015 election.

“The NEF at the moment has no party; the only candidate we have are the northern people and the only party for now are the northern states. Everybody should forget his party and join us in this struggle. Once we all sit down and make a pronouncement that this is who is going to represent us as the president of this country – so be it. We have the numbers behind us and politics is about numbers. We have the delegates – though the PDP are very good at stealing votes,” he said.

“We have over the years learnt our lessons from other regions of this country; the South West and South-South have succeeded in getting the president and have sealed up their area now; you can’t reach there without their consent. So why can’t we do the same here.”

On the Baga killings, the renowned agronomist said his Forum had commissioned a consortium of legal experts to visit the town and get first hand information that would enable them file a water-tight legal case against President Jonathan at the Hague.

“We had wanted to go to Baga to see things by our self but due to some circumstances beyond us, we are now sending a team of lawyers who are to prepare a case for us to file at the International Court of Justice,” he said.

Governor Kashim Shettima, who could not hide his appreciation and showered praises on the elders for the visit, assured them of his unalloyed support on the northern agenda, even as he noted that the region is still a force to reckon with in terms of land mass, human, and even natural resources.