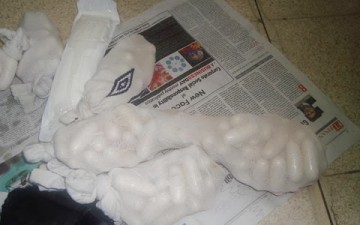 A suspected drug trafficker, Emmanuel Onedigbo, almost lost his life recently at the Murtala Mohammed International Airport Ikeja, when he was unable to expel a wrap of cocaine which got stuck in his anus.

Onedigbo, 28, who claimed to be an indigene of Anambra State, had allegedly inserted four wraps of cocaine in his anus but was arrested en-route Pakistan aboard a Qatar flight,.

He tested positive for narcotic ingestion alongside another suspect, Obinna Akwaeze, who allegedly ingested 67 wraps of cocaine.

Both suspects were nabbed by officials of the National Drug Law Enforcement Agency.

Expressing initial fears for Onedigbo’s life when he was unable to expel a wrap of cocaine, NDLEA Airport Commander, Mr. Hamza Umar said:

“While Akwaeze successfully expelled all 67 wraps of cocaine he ingested without assistance, Onedigbo was unable to expel one of the wraps until medical doctors came to his rescue. We were disturbed because his life was in danger.”

Checks also revealed that Onedigbo was recently deported from Thailand after serving a three-year jail term over drug related offences.

“It is true that I was deported in February 2013 after serving three years jail term in Thailand. I went back into drug smuggling because there was nothing for me to sustain myself,” he confessed.

He said: “It is very sad that a drug convict got involved in drug trafficking few months after his release and deportation. This shows that he is not remorseful.”

A total of 1.295kg of cocaine was found with both suspects.