An Abuja Federal High Court has refused to grant an application in which former Bayelsa State Governor Timipreye Sylva sought the release of his international passport to enable him to accompany his ailing wife to the United Kingdom. 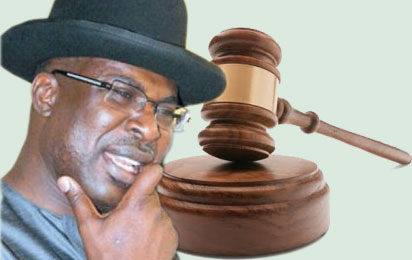 Sylva, through his counsel, Mr. Isaa Olorundare, had told the court presided over by Justice Adamu Bello, that his wife had been receiving treatment at the University of Port Harcourt Teaching Hospital, but “maybe because of the lack of experience or equipment in Nigeria, a referral has now been made to the Cromwell Hospital in London for the surgery”.His wife is to undergo surgery on Friday (today) in the UK. Initially, the surgery was slated for May 22.

He assured the court that he would return to the country, and submit his international passport to the court, once his wife received the medical attention.

But Sylva’s hope was dashed as Justice Bello refused him permission to accompany his wife to the UK.

Justice Bello noted that Sylva’s bid to accompany his wife on the medical trip was “suspicious”.

The Economic and Financial Crimes Commission, which is prosecuting Sylva over six counts of money laundering, had prayed the court to stop the former governor from undertaking the trip, describing it as a “ploy to escape justice”.

Refusing Sylva’s request, Justice Bello said there was no response to a referral letter, marked ‘Exhibit AA’, tendered by Sylva’s lawyer, purportedly written by a medical consultant at the University of Port-Harcourt Teaching Hospital to the Cromwell Hospital in the UK.

He said, “I observed that the referral letter written by a consultant at the University of Port-Harcourt Teaching Hospital to the Cromwell Hospital in the United Kingdom was not replied by the UK hospital.”

Justice Bello observed that a letter rescheduling the date of the surgery, marked ‘Exhibit B’, had indicated that the planned operation was of an urgent nature.

Justice Bello said, “It has taken 28 days from the day the surgery was booked, now the operation has been rescheduled from May 22 to May 31; this change in dates negates the sense of urgency the operation of Mrs. Sylva requires in the UK.”

“It is the view of the court that the ailment is not a life threatening one.

“The court’s observation is sufficient to raise suspicion that the truth has not been told the court by Sylva of his motive to accompany his wife abroad for a medical treatment.”

He added, “The court is convinced that the EFCC is investigating the accused applicant on fresh criminal offences and therefore would not grant his application to travel abroad so as not to undermine the investigation.

“The present circumstance does not allow the court to release his international passport.

“Therefore, the application is not granted.”