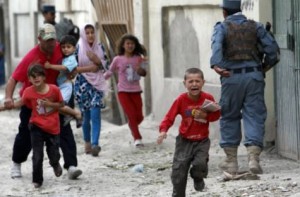 A suicide bomber struck in the heart of the Afghan capital Wednesday, sending a plume of smoke over Kabul in the second major attack in the city in little over a week, police said. The explosion was followed by an hours-long gun-battle in the central district.

The Taliban claimed responsibility and said their fighters were still battling police in Kabul and that they had allegedly killed several people.

However, Interior Ministry spokesman Seddiq Seddiqi said no one was killed except two insurgents. He said everyone inside the building that the Taliban took over was safely evacuated, adding that two civilians and two security forces were wounded. He would not confirm the nationality of the wounded, nor would he identify the building.

Details of the attack remained sketchy. Three hours after the blast, which shook much of the city, fighting was still going on in the upscale Shahr-i-Now neighbourhood.

Police officer Latif Khan, director of the city’s District 4, said the explosion was a suicide attack but could give no further information on the ensuing shootout.

The exact target of the attack was unclear. The explosion took place near a hospital that services the National Security Directorate, the state intelligence agency. Police quickly cordoned off the area, which also houses buildings used by several international aid agencies.

A restaurant owner in the district, Adel, said his cc-camera footage at the restaurant showed four gunmen in the street outside. He said he ran away with his staff.

“When I saw these four attackers, we decided to get away,” said Adel, who was running as he spoke to The Associated Press. Dozens of Afghan police were rushed to the scene in trucks and took up positions around the area. At least one wounded officer was seen being helped away by his comrades.

It was the second explosion to hit Kabul in just over a week.

Last Thursday, a suicide car bomber killed six Americans, including two soldiers, and nine Afghan bystanders in an attack on a US convoy.

As the Taliban spring offensive gets underway, it will test the Afghan forces’ ability to keep security now that international combat forces are pulling back ahead of the 2014 withdrawal.