Ten Ways To Tell If Someone Is Lying To You 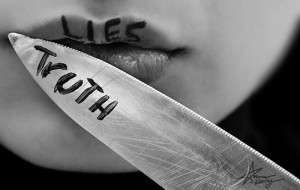 In business, politics and romance, it would be nice to know when we’re being lied to. Unfortunately humans aren’t very good at detecting lies. Our natural tendency is to trust others, and for day-to-day, low-stakes interactions, that makes sense. We save time and energy by taking statements like “I saw that movie” or “I like your haircut” at face value.

But while it would be too much work to analyze every interaction for signs of deception, there are times when we really need to know if we’re getting the straight story. Maybe a crucial negotiation depends on knowing the truth, or we’ve been lied to and want to find out if it’s part of a pattern.

In fact, being able to distinguish lies from truth is important not just in our personal lives but in the economy at large. Trust lubricates virtually every transaction we undertake. In fact, trust is worth trillions of dollars a year in the United States alone. It’s no stretch to argue that by reducing trust, liars make us collectively poorer.

Lies told on the printed page or on a TV screen may be the hardest to detect. When a journalist at a respected publication tells a tall tale–like the New York Times’ Jayson Blair or The New Republic’s Stephen Glass–those of us without reams of time on our hands aren’t likely to uncover it on our own.The same goes for deceptive campaign advertisements. Fortunately, at least in the case of politics, we can rely on nonprofit, nonpartisan organizations, to review the veracity of political claims coming from both sides of the aisle.

Face to face it’s easier to make our own judgments about whether someone is telling the truth. Psychologists who study deception, though, are quick to warn that there is no foolproof method. Bella DePaulo, a visiting professor of psychology at the University of California, Santa Barbara, writes that “lying is not a distinct psychological process with its own unique behavioral indicators. It does matter how liars feel and how they think.” Indeed, many of the tell-tale signs common to liars, like fidgeting and sweating, can also be signs of ordinary anxiety. It’s tough to tell the difference between a liar and an honest person who happens to be under a lot of stress.

That said, police officers and spies use a slew of interrogation tricks that the rest of us can adopt to improve our detection odds. The professionals look and listen for signs of nervousness, and pay close attention to the content of a suspect’s story. Does it contain a lot of detail? Does it stay consistent through repeated tellings?

Of course, there will always be those who have honed their deception skills to perfection, and they’re never easy to catch. Hardened criminals, especially ones who have been interrogated dozens of times, get better and better at lying, says 20-year New York Police Department veteran Derrick Parker. Magicians also know how to deceive by exhibiting a pleasant manner and relying on spectators’ assumptions.

For most of us, though, it’s not magicians or criminal masterminds we need to worry about when it comes to detecting deceivers. In fact, we should be most on guard against ourselves. “Often we don’t want to know when somebody is lying,” explains University of Massachusetts psychology professor Robert Feldman. In short, we are programmed to believe compliments and avoid painful truths, both of which make a liar’s task much easier.

I Have 28Years To Live: Femi Otedola

A Woman Who Doesn’t Like Money Is Not An Asset: Reno Omokri

Reno Omokri, a former aide during the Goodluck Jonathan led administration, has taken out time to dish out relationship advice to men. According to the...
Read more

The Oluwo of Iwo, Oba Abdulrasheed Akanbi Telu is of the opinion that his culture, Yoruba is no longer in tune with times. The monarch...
Read more
- Advertisement -