There was confusion at 12, Baoku Street, Ifako Agege, Lagos State, when a single parent, Grace Adenike-Alade, inflicted head injuries on her landlord, Mr. Lawrence Adeleke, after a minor disagreement.

Adeleke said he was attacked by Adenike-Alade, who claimed to be a Personal Assistant to the General Overseer, Mountain of Fire and Miracles Ministries, after he asked her to mop up the water which she poured at the entrance to her room to forestall domestic accident.

Adeleke said, “On the fateful day, about 9.30pm, I had returned from a party at Surulere when I saw water at the entrance to her room. So I told her to clean it up so that visitors and little children who might be passing through the passage would not slip and injure themselves.

“Instead, she replied, ‘I will deal with you; what do you think you are saying?’

“Before I could say any other thing, she had seized the nearest wood and hit me several times with it and blood started to gush out from my head and body.”

He said he could not fight back because he was losing blood, adding that his children had gone out for choir practice.

His neighbours were also said to have slept and could not intervene on the night of the incident.

It was learnt, however, that a neighbour, Mr. Jolaosho Olaniyi, came in the nick of time to stop the fight.

Olaniyi, who spoke with PUNCH Metro, on Wednesday said he saw the landlord drenched in blood.

He said he had to wrest the wood from Adenike-Alade and advised Adeleke to report the matter to the police after going for medical treatment.

Adeleke told our correspondent that he reported the matter to the police at Area G Command, Ogba, where his blood-soaked clothes and underwear were taken to as evidence.

He said Adenike-Alade was subsequently arrested and detained.

He, however, alleged that she kept boasting of being the PA to the GO of MFM and that she would be released.

Adeleke said, “To my dismay, she was released and the Police asked me to go and bring N20,000 if I wanted the matter to be taken to court or N10,000 in the alternative to settle out of court. I was surprised.

Later, they said she also suffered injuries and here was a woman that didn’t complain of any pains from Saturday when she was arrested till Monday, she was released.”

When PUNCH Metro called to speak with Adenike-Alade, she cut off the telephone after learning she was speaking with a journalist.

“I don’t speak with strangers,” she said.

She later invited our correspondent to the Headquarters of the MFM church at Olasumbo Street, Onike, Lagos.

When our correspondent got to Onike on Thursday, Adenike-Alade could not be located. Our correspondent moved round the church, but nobody was willing to reveal her whereabouts.

Other attempts to reach her proved abortive as she neither picked up her telephone set afterwards nor replied to the text messages.

PUNCH Metro visited her residence at Baoku Street in Orile Agege and learnt that Adenike had locked up the room for some days.

The landlord said he had written the GO of MFM, Pastor Daniel Olukoya, to complain about her conduct.

He demanded compensation for his material loss and hospital bills.

Police Public Relations Officer, Mrs. Ngozi Braide, confirmed the incident to PUNCH Metro. She, however, denied the allegation that the police made any demand from Adeleke.

Braide said, “The Area Commander said it was a case of affray and that both parties were seriously injured in the fracas, which was confirmed by some witnesses.”

She said both parties were invited for an interview with the Area Commander and Adeleke had yet to show up. 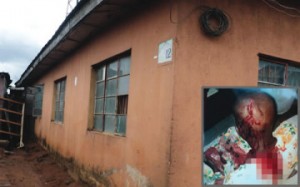