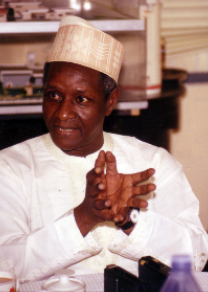 Nigeria’s former Vice-President, Alhaji Atiku Abubakar, on May 29 – Democracy Day – reflected on Nigeria’s democratic journey so far and concluded that it must be preserved.

The Turakin Adamawa who told a story probably never been heard before by majority of Nigerians in 45 tweets, hoped that it would help “many of our young people who never saw the evils of military rule, appreciate our democratic journey.”

In a tribute to those whom he described as “fallen heroes of democracy,” who are “unsung and oft forgotten”, Atiku went down memory lane to as far back as the late 80’s.

“May 29 is Democracy Day in Nigeria, a day we celebrate democracy. Personally, I celebrate our democracy heroes on the day.

“Yesterday, I promised a story. I will begin shortly.

“In the late 80’s I met Shehu Musa Yar’Adua (SMY). He needed help Customs approvals. We became friends. This was the beginning -1

“About that time, SMY was bringing individuals across Nigeria to form a movement to pressure the IBB government to hand over -2

“This political movement was a big risk, as political organisations were banned then. But SMY was adamant the military had to leave -3

“SMY held meetings at his home in Ikoyi, organising quietly. The group came to be known as The Yar’Adua Group. He also recruited me -4

“Many people, including me, probably may not have joined politics but for Yar’Adua’s mentoring. He was great at organising & leading -5

“1989. Because Yar’Adua had organised, he was ready to register People’s Front of Nigeria (PFN) as soon as IBB lifted the political ban -6

“SMY & I funded PFN, the most organised party then, but in October 1989, the military banned the parties, SMY was banned from politics -7

“The military government formed the SDP and NRC. Because SDP closely resembled PFN in ideology, Yar’Adua led us into the SDP -8

“SMY encouraged me to run for governor in Gongola State, later Adamawa, which was created in 1991 -10

“I won the governorship but my opponents protested and I was banned. SMY encouraged me to let it go, and focus on the democratic goal -11

“I coordinated Yar’Adua’s campaign when he won the SDP presidential primaries, but the primary was cancelled. SMY was banned yet again -12

“SMY was persecuted by the government, which extended the military handover date to August 17, 1993, and tried to manipulate the parties -13

“Having been banned, Yar’Adua asked me to run for president! It was unbelievable. I shared all his beliefs, but never thought I could run -14

“Myself aside, Babagana Kingibe, a former Yar’Adua Group member whom SMY supported to SDP chairmanship, was also running – 15

“A newcomer, Moshood Kashimawo Oluwale (MKO) Abiola, a rich businessman and publisher, was also running for the SDP ticket then -16

“We of course had expected Kingibe, a former Yar’Adua Group member to support us, but he didn’t. SMY felt betrayed -17

“After the first ballot, I came 3rd, we met with Abiola to promise our support. He in return was going to appoint me as his running mate -18

“Because Yar’Adua and I were bent on ending military rule, our personal ambitions had to be sacrificed. We threw support behind Abiola -19

“Abiola did not honour the agreement to make me his running mate. He picked Babagana Kingibe. Yar’Adua felt betrayed once again – 21

“To persuade Yar’Adua to support Abiola, I went to meet General Obasanjo, his former boss, in Ota Farm – 22

“Despite the betrayal, SMY was persuaded by Obasanjo and us to support Abiola again for the sake of democracy -23

“We were saddened about the annulment, and tired of the endless transition. That’s why we agreed to the Interim National Government (ING) -25

“Despite the pretensions to get a new constitution, for which SMY & I were elected to a conference, Abacha had no democratic intentions -27

“Defying repeated threats from Abacha’s government, more than anyone else, Shehu Yar’Adua kept pushing Abacha for a handover date – 28

“If SMY enjoyed any respect as a senior officer under IBB, there was no such respect under Abacha. Yar’Adua was simply seen as a threat -29

“On March 9, 1995, Yar’Adua was arrested. Obasanjo was also arrested. While in jail, they heard the government had announced a coup plot -30

“Abdulsalami Abubakar, Chief of Defence Staff, announced that 29 officers and civilians had been arrested in connection with a coup plot -31

“Under torture, arrested officers were forced to confess to plotting a coup, and implicating Yar’Adua and Obasanjo -33

“A sham trial was staged. Yar’Adua was sentenced to death and Obasanjo to life imprisonment -34

“I was out of the country when Yar’Adua was picked up. When I returned, my residence in Kaduna was attacked by unknown gunmen in May 1995 -35

“Six policemen and one guard died in that attack. It is still a miracle to me how my wife, Titi, our son, Adamu, and I escaped unhurt -36

“In detention, SMY was more concerned about Nigeria’s future than about his life. He feared that Abacha had thrown Nigeria into chaos -37

“Because of SMY’s continued activism, even in Kirikiri Prisons, he was later transferred to Port Harcourt and Abakaliki Prisons -38

“Abacha was not satisfied keeping Yar’Adua in jail and intimidating me. He seized our biggest business & removed us from the board – 39

“Abacha’s security agents trailed me everywhere. They bugged my phones and seized my passport – 40

“1995. In the end, I fled the country, smuggled on a London bound flight from the tarmac. SMY was not so lucky -41

“Yar’Adua was repeatedly tortured in prison, and he was denied access to proper medical treatment, yet he persevered -42

“Yar’Adua kept in contact with associates through letters and tapes while in prison. He still believed in the course of democracy -43

“Terminally ill, SMY was deliberately denied treatment till the last minute. He died on the way to hospital, after approval finally came – 45

“But what was Yar’Adua’s legacy to Nigeria’s democracy?

“The PDM, as his movement came to be known, spanned across all of Nigeria’s regions

“Shehu believed in democracy, and paid the ultimate price. He died for democracy.”