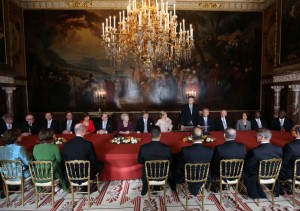 An estimated 25,000 well-wishers cheered outside the Royal Palace in Amsterdam as the abdication and automatic succession were broadcast live.

The crowds had gathered in Dam Square from early on Tuesday to see the new King and his wife, Queen Maxima, as they stepped out onto the balcony of the Royal Palace. Beatrix blinked back tears as she presented her son.

Wearing a sober purple dress, Beatrix signed the abdication document in front of the Dutch cabinet, Willem-Alexander and Maxima, who wore a pale rose-coloured dress with a shimmery skirt and enormous bow on her left shoulder. 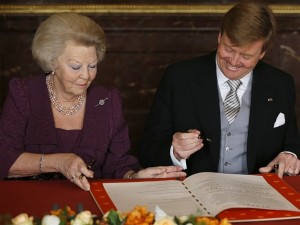 “Today, I make way for a new generation,” said Beatrix, 75, who now takes the title of Princess.

Willem-Alexander, a 46-year-old water management specialist, is expected to bring a less formal touch to the monarchy together with Maxima, a popular former investment banker from Argentina.

April 30, or Queen’s day, is always a day for partying in the Netherlands. Many people took Monday off work and started celebrating in earnest from Monday evening with street bands and music.

Beatrix chose to retire after 33 years in the role, following in the tradition of her mother and grandmother.

Amsterdam has been awash with orange, the royal color, for days. Houses were covered in bunting and flags and shop windows were stuffed with orange cakes, sweets, clothes and flowers.

Nearly a million people were expected to join the street party with dancing to bands and DJs, helping create a carnival atmosphere.

The royals are broadly popular, with 78 percent of Dutch in favour of the monarchy up from 74 percent a year ago, according to an Ipsos poll.

But they have been stripped of their political influence, and no longer appoint the mediator who conducts exploratory talks when forming government coalitions.

The Dutch monarch is never crowned, since, in the absence of a state church, there is no cleric available to carry out the coronation. But there is a crown, which will sit on a table next to him throughout the ceremony, along with other regalia that constitute the crown jewels.

Willem-Alexander will wear a royal mantle that has been used for investitures since 1815, although it has been repaired and altered at least twice over the past century, for the investitures of his mother and grandmother. [NBC]