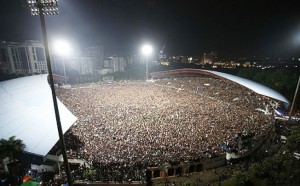 Thousands of Malaysians took to the streets near Malaysia’s capital in a rally against alleged electoral fraud, further raising the political temperature after divisive recent polls.

The latest in a series of protest rallies over the May 5 elections – which the opposition says were won fraudulently by the 56-year-old ruling coalition – saw a large crowd gather in an open field outside Kuala Lumpur Saturday night.

Malaysia’s Home Minister Zahid Hamidi had earlier called the rally a “provocation”, coming after four people were arrested including two opposition politicians, actions that sparked allegations of a post-election crackdown on dissent.

There were no reports of any police action against the latest rally, which was to include speeches by top opposition figures including leader Anwar Ibrahim.

Opposition speakers vowed to expose electoral fraud and keep up the pressure on the Barisan Nasional (National Front) government.

“We are never disappointed because we have won decisively, the moral victory. Tough times never last, only tough people do. We will prove to [the government] how tough we are,” Anwar’s daughter, parliament member Nurul Izzah, told the crowd.

Two senior opposition politicians and two activists were detained last week under the Sedition Act for criticising the conduct of the elections. They were later released.

Prime Minister Najib Razak, who before the elections sought to portray himself as a reformer, had pledged last year to repeal the decades-old Sedition Act.

The home ministry last week also said it had seized some 2,500 copies of opposition-party newspapers for allegedly failing to meet printing regulations.

The three-party opposition plans to file court challenges to the result in 27 parliamentary seats. If all are successful, the opposition says it would give them victory.

But it is highly unlikely the opposition would prevail, as critics widely accuse the courts and Election Commission of being in thrall to the ruling coalition.