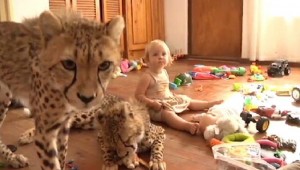 For parents Hein and Kim Schoeman, allowing two cheetahs to play with their toddlers is an everyday occurrence because the young children have formed an unusual bond with the wild cats.

One-year-old Kayla and her 3-year-old brother, Malan, treat the cheetahs as ordinary house cats in their home in South Africa. The relationship between the family and cheetahs is the subject of their new documentary titled “Cheetah House.”

The cheetahs are never excluded from family activities such as cuddling with the toddlers, taking a ride and roaming the house without a leash. It might be a dicey lifestyle for some, but for the Schoemans, experienced animal trainers who live and work on a reserve, it’s their bid to show how people and wild animals can bond.

“At the end of the day, it all boils down to how humans and nature can live together and respect each other. That’s what it’s about,” Hein Schoeman said in a Skype interview with ABC News.

The cheetahs, Wakku and Skyla, were born about a year ago at an animal reserve in Albertinia, South Africa. The couple didn’t think the mother cheetah could take care of all four cheetah babies.

Wakku and Skyla were not getting enough milk and nutrition and the Schoemans feared they were going to die. That’s when they stepped in and adopted the cubs, and welcomed them into their home.

“When you raise them, it’s extremely strict. You need to establish dominance and respect first of all and maintain that,” Schoeman said.

Jack Hanna, director emeritus of the Columbus Zoo in Ohio, saw the video of the Schoemans’ children cuddling with Wakku and Skyla. Hanna says cheetahs are actually gentle creatures but cautioned that this is not something people should try at home even though it makes for a great Facebook default photo.

“No, it’s not a good idea because this is not something you’re going to go out and do yourself,” Hanna warned.

Cheetahs, the world’s fastest animal on land, were once kept as companions to pharaohs of ancient Egypt.

The Schoemans are training Wakku and Skyla to hunt so they could one day leave the house and enter into the wild.

Zookeeper Hanna said, “So when they go visit their cheetah out in the wild someday, they’ll be in that land rover, seeing that beautiful creature out there 100, 200 yards away. That’s how far they’ll stay away from it. Let him be a cheetah.”

Until then, the Schoemans say they have been “very lucky” to have this extraordinary experience.