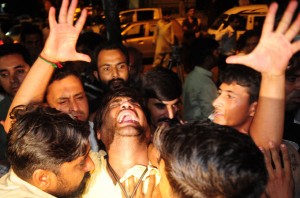 A senior member of Pakistani politician Imran Khan’s party has been killed in Karachi, just hours before re-elections were scheduled to begin in the city.

Zahra Shahid Hussain, the central vice president of the Pakistan Tehreek-i-Insaf (PTI) party and one of its founding members, was killed late on Saturday.

The motives behind the attack are currently unclear, but the Pakistani Taliban are usual suspects in such attacks. The Taliban, who denounce democracy as un-Islamic, killed more than 150 people during the election campaign, including 24 on polling day.

Hussain “was leaving her home for some work when three gunmen attacked her. She thought they wanted to snatch her purse and handed it over to them but they killed her”, Firdous Shamim, a local PTI leader, told the AFP news agency.

Police said all three assailants escaped after the attack late on Saturday.

“They shot her with one bullet near her chin and she could not survive,” Nasir Aftab, senior police official, told AFP news agency.

On average 12 people are killed in Karachi every single day, he said.