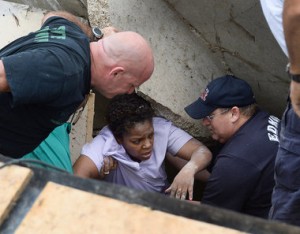 Rescue workers are near the end of the search for survivors in the Oklahoma City suburb where a rare and powerful tornado claimed 24 lives, including nine children, injured at least 230 and left dozens missing.

Although thunderstorms and lightning slowed the rescue effort on Tuesday, 101 people had been pulled from the debris alive, according to police.

Moore’s fire chief had said he was confident there were no more bodies or survivors in the rubble, after nearly 24 hours of thorough searching.

President Barack Obama had promised earlier to make available all necessary government resources to Oklahoma to help in the rescue and recovery effort.

“The people of Moore [Oklahoma] should know that their country will remain on the ground, beside them, for as long as it takes,” Obama said at the White House.

The US president called the devastation as “one of the most destructive tornados in history”, even though he said the extent of the damage was still unknown.

Obama spoke on Tuesday after an Oval Office briefing on the latest developments from his disaster response team and as Federal Emergency Management Agency Director Craig Fugate was heading to Oklahoma.

The tornado which razed two schools and ripped off the roof of a medical centre in Moore left the town strewn with debris, and many residents in the structures spared by the storm without power and water.

Scientists concluded the tornado was an EF5 on the enhanced Fujita scale, the most powerful type, capable of lifting reinforced buildings off the ground, hurling cars like missiles and stripping trees completely free of bark. The amount of energy released dwarfed the power of the atomic bomb that levelled Hiroshima.

The tornado covered about 30km of ground as it demolished buildings including Plaza Towers Elementary School where about two dozen children had sought shelter inside from the storm when the building collapsed and trapped them in the rubble.

At least 45 of the 230 people known to have been injured were children, according to area hospitals.