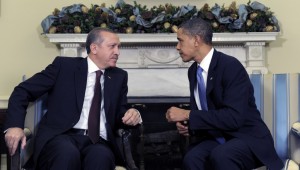 Turkish Prime Minister Recep Tayyip Erdogan is looking for stepped-up action on Syria as he meets with President Barack Obama at the White House. But the US and Turkey remain far apart on how to handle Syria’s bloody civil war.

Erdogan is visiting Washington on Thursday just days after two car bombs in Turkey killed dozens in the deadliest terrorist attack there in years. Turkish authorities have blamed Syrian intelligence, and Erdogan has been calling for more aggressive steps to topple Syrian President Bashar Assad’s government.

But the Obama administration remains reluctant to take the kind of action Turkey would like to see, including establishing a no-fly zone in Syria.

The disagreement was unlikely to spoil a day of pomp for Erdogan, who met with Obama Thursday morning before they were to appear in the Rose Garden at lunchtime for a joint news conference.

Erdogan also was being treated to a formal lunch at the State Department with Vice President Joe Biden and Secretary of State John Kerry before his return to the White House for a working dinner with the president.

An Honor guard also lined the north driveway of the White House as Erdogan arrived by limousine.

The visit comes as Obama struggles with a series of scandals, including the targeting of conservative political groups by the US tax collecting agency, his response to last year’s deadly attack on a US diplomatic facility in Benghazi, Libya, and the seizure of Associated Press phone records by the Justice Department as part of a leak investigation. The topics were expected to come up during the news conference.

Despite differences over Syria, Erdogan will welcome the opportunity to showcase his close ties with Obama.

He arrives after recently marking 10 years in office as a dominant figure in Turkish politics. As much as Erdogan wants the US to exert greater power in Syria, the Obama administration sees Turkey as a critical broker on a host of issues in the region.

The administration recently negotiated a deal to repair ties between Turkey and Israel, which were severed following a 2010 Israeli raid on a Gaza-bound aid flotilla in which eight Turks and a Turkish-American were killed. The administration hopes to see an understanding sealed during Erdogan’s visit on compensation for the victims of the raid and their families. [AlJazeera]