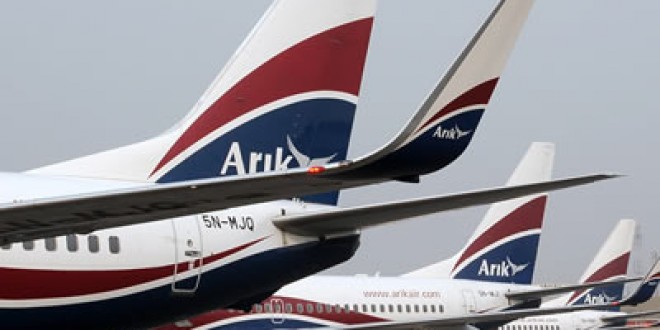 Two staff of Nigeria’s foremost airline, Arik Air, were on Tuesday arrested at the Heathrow Airport, London, in connection with alleged drug trafficking.

The arrest of the suspects who are cabin crew members, will make it the second time in 18 months that staff of the airline have been arrested in London for drugs-related offences.

The suspects, Temitayo Olubunmi Daramola and Delita Abibimgbi were arrested for being in possession of 6kg of cocaine and 60 packets of cigarettes respectively.

UK Customs allow a maximum of 10 packets of cigarette per passenger.

In the latest arrest which has been described as an embarrassment, the aircraft was reported to have taken off from the Murtala Mohammed International Airport, MMIA, Lagos to London only for the security at Heathrow to discover the illicit drugs with the two crew members.

Eight out of 10 crew members that travelled with the flight were said to have been cleared while the remaining two were still being held in London.

However, the National Drug Law Enforcement Agency, NDLEA, has ordered a full scale probe into the incident.

In a statement signed by the Head, Public Affairs, Mr. Mitchell Ofoyeju, the Chief Executive of NDLEA, Ahmadu Giade, ordered officials of the agency to immediately commence investigation into the matter.

The statement reads in part: “We have received report of the arrest and I have ordered a full scale investigation of the incident.

“Anyone found wanting shall be brought to book as no effort shall be spared in protecting the image of our country.” The agency has also vowed to beef-up security checks at all entry and exit points in the country.

A statement signed by the spokesman for Arik, Mr. Banji Ola, yesterday confirmed the detention in UK of two of its cabin crew members and stated that the airline was co-operating fully with the UK authorities and all other concerned agencies in their investigations.

Ola said: “Arik Air remains committed to the fight against drug and illicit substances trafficking and will not tolerate the use of any of its aircraft or crew for the courier of banned items and substances.

“Arik Air carries out very stringent checks on all members of staff and its travelling guests ahead of all flights.

“It will continue to focus its attention on measures to prevent the possibility of any future similar incidents.

“Arik Air is a responsible Nigerian company always seeking to maintain and uphold the integrity and proud reputation of the nation” the statement read.