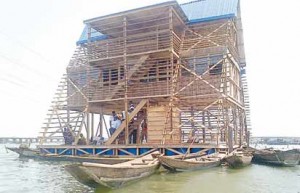 The ultra-modern three storey building Makoko floating school has been described as an ‘illegal’ structure by the Lagos state government.

The structure which sits on an area of 220 metres was built on a foundation of 256 plastic drums and powered by solar panels suspended on the roof. The school which is about seven months old is a joint effort by residents of Makoko/Iwaya Waterfront Community, Yaba Local Council Developmet Area, LCDA, United Nations Development Programme, UNDP and a private firm – NLE Works, Nigeria.

Making Government’s position known on the school, the Commissioner for Waterfront and Infrastructure Development in Lagos State, Prince Adesegun Oniru said; “The floating school has been illegal since inception. The owner of the floating school waited until there was a legal issue in the area before he commenced the construction of the school.”

According to him; “So as far as that floating school is concerned, it was erected without the permission of the state government.

“The simple answer to the floating school is that it is an illegal structure and it shouldn’t be there.” The commissioner said that its development will affect the government’s redevelopment plan for the area, saying “This wouldn’t deter us to abandon our plan for the area.”