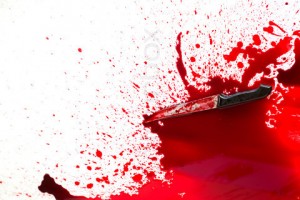 Police authorities said the suspect stabbed his 46-year-old father to death while the man was attempting to enter his room.

Olanrewaju was a student of University of Ilorin, Kwara State, but was expelled because he had poor grades.

A police source at Langbasa Divison, where the suspect was detained, told our correspondent that the incident occurred on May 1, 2013.

He said, “Olanrewaju is the first of five children. He lived with his parents and siblings in a duplex in Langbasa. He was enrolled in University of Ilorin to study Geology in 2011 but was later asked to withdraw because he had very poor grades.

The senior officer told our correspondent that the suspect was not happy about the arrangement. He said the frustration later led him to laying an ambush for his father while he was trying to enter his room.

He said the suspect stabbed his father in 10 different places, causing him to bleed to death.

He said, “Around 10pm on that day, the whole family had just had dinner and they were watching television when their father received a telephone call. He went upstairs and when he got to the entrance of the room, Olanrewaju appeared from nowhere with a kitchen knife.

He stabbed his father in the back, sides, hands, legs over 10 times. The man, who was screaming in pains, attracted the attention of other members of the family who were downstairs.

When the mother came upstairs, she found her son still stabbing her husband. The presence of other children did not also stop Olanrewaju.

When she tried to save her husband, Olanrewaju threatened to stab her if she came close. The woman then went outside and called on neighbours for help.”

It took the intervention of neighbours to overpower the 18-year-old and wrest the knife from him. It was learnt that the victim was rushed to J-Rapha Hospital but was pronounced dead on arrival.

A resident, who spoke to our correspondent on the condition of anonymity, said the family had been in shock and had not been staying home since the incident occurred.

He said, “The family is a young one. Olanrewaju is the first born and he had four younger siblings.”

The suspect, who was not remorseful, said he killed his father because he was convinced that his father did not love him.

He said he was not worried about his predicament since he was too young to be prosecuted.

“The case is a very long story. The truth is that my father never loved me and the only form of care he showed me was paying my school fees. I am just 18-years-old so I know I cannot be prosecuted. I have no regrets for my action,” he said.

When contacted on the telephone, the Police Public Relations Officer, Ngozi Braide, said she had yet to be fully briefed on the incident.