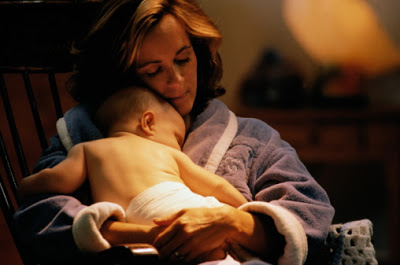 Myth #1: You should never wake a sleeping baby.

The truth: You’ve probably heard this one a thousand times already (and maybe even used it when your in-laws dropped by unexpectedly for a visit with baby), but don’t believe it. In the first few weeks, your baby needs to eat what seems like constantly but is actually every two to three hours. So there may be times when you will have to gently nudge her awake for a feeding, says Tanya Remer Altmann, MD, author of Mommy Calls (American Academy of Pediatrics, 2008). And that’s not only okay, it’s important so she can put on a healthy amount of weight. But once a newborn has regained her birth weight, Altmann says, it’s fine to let her sleep as long as she wants at night without waking her to feed (and if she does manage to extend her sleeping stretches, woo-hoo!). Just make sure she’s still feeding often during the day.
Myth #2: Crib bumpers protect baby.
The truth: Crib bumpers may seem like they’ll protect baby from bumps and bruises, but they can actually be dangerous since they (just like any other puffy bedding like comforters, pillows and sleep positioners) pose a suffocation risk. “I’ve never seen a baby who’s seriously injured his head banging it on the side of the crib,” says Altmann. “But babies have rolled and gotten tangled in bumpers.” So keep the bumper—and anything else besides a fitted crib sheet and your baby—out of the crib.
Myth #3: Keep the nursery completely quiet.
The truth: Sure, you may need complete silence to fall (and stay) asleep, but most newborns actually love background noise with a shushing sound, like that of a fan. “It can be comforting and familiar, since they heard constant, loud noise 24/7 when they were in utero,” says Altmann. (Yup, it was pretty noisy inside your belly.) Plus, that white noise can drown out other sounds in the house, which can distract baby from sleep. So if you’re having trouble calming baby down or getting her to stay asleep, consider trying a white-noise sound machine or some other shushing device to help her sleep.
Myth #4: Baby should sleep through the night at 12 weeks.
The truth: Okay, here’s the deal with this one: Yes, it would be nice, but it’s an unrealistic expectation that will only stress you out. “If you have a good daytime eater, with a consistent routine and a bit of luck, your baby will sleep through the night at 12 weeks,” says Altmann, who stresses the luck part. For everyone else, she says, it may not happen for another month or two or—ouch—three, and that doesn’t mean you’re doing anything wrong. But you can do some things to encourage your baby to start sleeping for longer stretches: Establish a short, calming bedtime routine, allow your baby to fall asleep on his own (no nursing or rocking him to sleep), and once he’s asleep, don’t run to the nursery at every little noise he makes—he needs to learn he can fall back to sleep on his own. If you’re consistent, she says, you increase the likelihood that your infant will be sleeping at least six to eight hours straight at night by four to six months of age.

Myth #5: Setting a late bedtime will prevent baby from waking too early in the morning.
The truth: Uh, wouldn’t that be nice? It seems so logical, but sorry, this almost always backfires. Here’s why: Keeping your baby up late at night will make her overtired, and when kids are overtired, they get wired, actually making it harder for them to fall asleep and to get back to sleep if they wake up early. To get your baby to sleep later the next morning, you’ll actually have better luck making her bedtime earlier. “Trust me and try it,” says Altmann. “Put your kid to sleep 30 minutes earlier than usual. They will begin sleeping a bit later in the morning.”

Myth #6: It’s okay to let the dog sleep in the nursery.
The truth: The American Academy of Pediatrics (AAP) recommends never leaving a baby or child alone with a pet—and that includes allowing the pet to sleep in a child’s room. The reason: About 600,000 children are bitten by dogs every year, badly enough to need medical attention. Even a playful cat can jump into a newborn’s bassinet or crib and scratch—or smother—them, says Altmann. “I’ve seen horrible dog bites in infants, and they’re often from a dog the family knows,” she adds. Play it safe and declare the nursery a no-pet zone.

Myth #7: Adding cereal to baby’s bottle will help her sleep through the night.
The truth: There’s actually no evidence that adding cereal to baby’s bedtime bottle will help her sleep longer, so there’s no point in doing it. In fact, cereal in a bottle increases the number of calories baby consumes, and some studies show that feeding baby solid foods before four months can contribute to obesity. The AAP recommends waiting to introduce solid foods until baby is four to six months old, and to always spoon-feed solids since baby could choke on them if they’re dispensed through a bottle. (There are some exceptions, like if the doctor recommends cereal as a treatment for reflux. In those cases, follow your doc’s recommendations carefully.) As for getting her to sleep through the night, you’ll have better luck with the tips we mentioned above under myth #4.