Business activities at the Allen Avenue office of Dana Airlines came to a halt on Wednesday after the owner of the two-storey building destroyed in the plane crash, Pastor Daniel Omowunmi, locked the main gate of the office and blocked the entrance with his Toyota Sports Utility Vehicle. 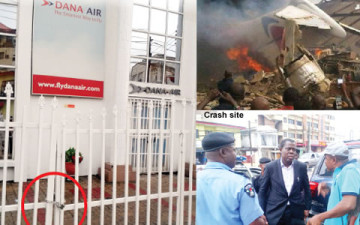 Omowunmi, who arrived Dana office at 5.30am, brought with him three iron chains and padlock which he used to lock out all employees of the company.

The ill-fated Dana flight 992 killed over 153 people on board, as well as approximately 10 other persons and caused injuries to many people on the ground.

The plane also crashed into Daniel’s house and factory and destroyed his property, which he said, was worth N500m.

Omowunmi told our correspondent that he decided to lock up the place because all attempts to get compensation from Dana had proved abortive.

He said, “In some weeks’ time, it will be a year that the plane crash occurred. I have not been working up till now. They destroyed my properties and rendered me jobless since June 3, 2012. Dana has commenced operation but it has not said anything meaningful about my case.

“Officials of the company have been going on air with all sorts of propaganda claiming that they have settled all those affected. That is why I have come here so that they can come out to tell me the kind of arrangements they have made, the amount they paid and who they gave it to.”

The Pastor said the N500m he lost to the crash represented the value of his warehouse, publishing house, fish ponds and other businesses.

He said, “My properties are four plots of land with a detached six-bedroom building, two standard warehouses, a bungalow at the back of the warehouses and four fish ponds. Everything was destroyed, including my second jeep parked on the premises. My furniture, six container loads of books and five container loads of kitchen utensils all destroyed.

“Up till today, they have not said anything tangible and yet they are flying. If they think they will carry on with business like that and it is going to be easy, they must be joking.

“The claim I put before them is about N500m and up till now, the only thing they have made available to me after much pressure was $30,000 dollars to rent a house. After that, they have not been forthcoming. My lawyer actually persuaded me to collect the money.”

The area was tense as over 20 employees of the company waited outside the company and in the rain, which started around 4am.

Some of the employees, including an Indian, appealed to the pastor to open the gate and seek alternative means of pressing home his point but he refused.

Around 9am however, a team of policemen stormed the vicinity and one of the policemen, Corporal Giwa Mohammed, dragged the pastor into a Rapid Response Squad patrol vehicle with registration number 195LA.

A few minutes later, senior officers attached to Area F Command arrived at the scene and appealed to Omowunmi to unlock the gate.

Omowunmi, while fighting back tears, said life had become unbearable for him and he had been pushed to the wall.

He said, “I have not been able to meet my obligations to my family. I have three children. For the first time in my life, I had to get money from people to pay my children’s school fees last week.”

After much persuasion, however, the Pastor unlocked the gate and followed the policemen to Area F.

It was learnt that the area commander, Tunde Adagunduro, had written a letter to the management of Dana, inviting them to a meeting with the Pastor to prevent another episode.

When contacted on the telephone, the spokesperson for the airline, Tony Usidamen, said he was aware of the protest but could not confirm if Omowunmi’s claims were true since it was the insurance company that was in charge of compensation and not Dana.

He said, “I know some people have been compensated and I know that he (Omowunmi) was given some money. I however do not know the level of compensation because Dana does not handle compensation rather; the insurance company does.

“I will find out tomorrow to know how far with his payments. Our duty is to pay premium to insurance company and we just follow up to know the level of compensation.”