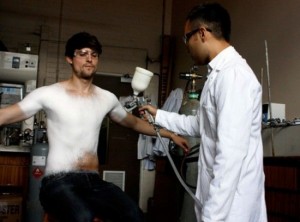 Spanish fashion designer Manel Torres is the man behind the world’s first spray-on clothing, which is applied directly on the body and can be washed and worn again just like your regular clothes.

It may sound like something out of a futuristic film, but Manel Torres actually patented his amazing spray-on clothing back in the year 2000. He came up with this original idea while studying for his MA in Fashion Women’s Wear, at the Royal College of Art, London. Torres was aware of the slow process of creating regular garments, from weaving the actual fabric to dyeing it and tailoring the clothing items, so he tried to come up with “a futuristic, seamless, quick and comfortable material.” I’m sure most of you can come up with even more outrageous concepts than a spray-on fabric, but the Spanish designer was determined to make his a reality. Since he had no real knowledge of chemistry he sought the help of scientists at the London Imperial College, and after years of research and testing, Manel invented the spray that turns into a wearable second skin in contact with the human body.

The sprayable fabric envisioned by Manel Torres consists of short fibers mixed with a solvent, which allows them to be applied from a can or a high-pressure spray gun. The spray also contains polymers that bind the fibers together forming a wearable material. Its texture can vary depending on the type of fibers used (wool, acrylic, linen, etc.). Some of you may be put off by the fact that the fabric is very cold when sprayed on the body, but the fact that it hardens almost instantly forming a brand new t-shirt of a pair of pants, makes it all bearable. Another thing many people have been wondering ever since the designer showcased his spray-on clothing is weather it works for hairy people. During a presentation for TEDx Talks, he assured everyone that hair doesn’t stick to his wonder material.

In most video reports on this revolutionary clothing-i-a-can, Manel gives every item a unique look, by spraying it with various colors, but in reality, it’s a lot more versatile. Apart from the different possible textures, these sprayed-on clothes can be embossed, stenciled or decorated with all kinds of patterns. You can basically create your own clothes and accessories in just a few moments. And you don’t have to throw them away after a single use, either. Torres’ durable fabric can be washed and worn again just like traditional garments.