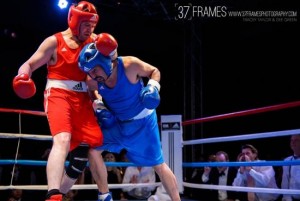 The gloves were on at the second ever Executive Fight Night, in Tokyo, last week, as 14 corporate executives from seven different countries went into the boxing ring for some good, clean fun and settling rivalries between companies.

“To usher in a new era of fitness amongst stressed-out Tokyo executives and stage a safe, professional and unprecedented, Vegas-style Boxing event that would become a regular hit on the annual Tokyo social calendar.” This is the mission of Ginja Ninjas, the offbeat company behind Executive Fight Night. It was founded by three corporate employees who after a stressful week at work got together and decided that enough was enough, executives needed a way to let off some steam, and what better release valve than boxing? Bringing a unique form of entertainment to the masses wasn’t enough for the “ninjas”, who decided to donate all the proceeds from the event to various charities. It also made it harder for corporate bosses to say no to a boxing invitation, but according to organizer Dave Thomas, the rivalry between Tokyo companies is enough to get people into the ring.

The latest Executive Fight Night was held on May 24, at the Grand Hyatt Hotel in Roppongi, and featured sales managers, brokers, company presidents and general managers going head-to-head in 3 two-minute rounds of boxing. None of them had any fighting experience prior to the event, but they all had to go through a rigorous 12-week training program run by professional trainers and fighters, in order to get in shape and put on a good show. It was all in good fun, but as you can see in the videos below, no one held back. Cheered on by hundreds of colleagues from the audience, every one of the 14 fighters felt like they had something to prove.