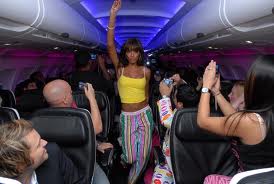 An American Airlines flight en route from Los Angeles to New York had to make an emergency landing last Thursday because a woman wouldn’t stop singing I Will Always Love You, CNN reports.

The flight landed in Kansas City to remove the woman from the plane.

“The passenger was detained, not arrested, and then released pending further investigation by the TSA (Transportation Safety Administration) and federal air marshals,” airport spokesman Tom McKenna said, according to a report from CNN affiliate KMBC.

“I can confirm that she was singing I Will Always Love You as she was escorted off the plane.” McKenna said.