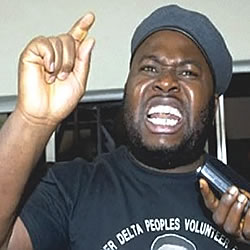 Leader of the Niger Delta People’s Volunteer Force (NDPVF), Alhaji Mujahid Dokubo-Asari has dared the House of Representatives and security agencies to arrest him over comments he made to the effect that there will be no peace in Nigeria if President Goodluck Jonathan is not re-elected in 2015.

Asari, who was obviously smarting from reactions that trailed his comments, said that any attempt to arrest him will mark the end of Nigeria and called the authorities cowards if eventually the threat of his arrest was not carried out.

Speaking in a Press Conference in Abuja Thursday, Asari said he is not bothered over his previous comment on 2015, reiterating his earlier stance that Niger Delta militants will take up arms against the state if their kinsman – Jonathan, is not re-elected for a second term in office come 2015.

His words: “I stand by my statement which I made in my early press conference, there will be no peace, not only in the Niger Delta, but everywhere, if Goodluck Jonathan is not president by 2015, and I want to add that the Fulanis, who migrated and invaded our lands and continue to show disregard and disrespect to the owners of the country they came into, and people have tolerated them for a very long time will no longer continue.”
More Details soon