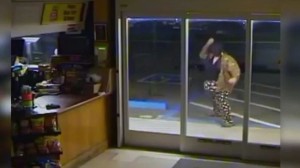 A NORTHERN California grocery store owner is trying to profit from a suspected thief’s botched burglary attempt that was caught on video.

Footage shows the man breaking the Redding store’s window last month and tripping twice as he ran away.

Now store owner Kent Pfrimmer has turned it into a television commercial for his business, Kent’s Meats and Groceries.

The ad for the store’s pastrami features footage of the suspect throwing something at the store’s window. The sound of shattering glass can be heard before pastrami appears on camera, followed by the voice-over: “So good, some people will do just about anything to get more.”

A call to Redding police to check on the investigation was not immediately returned.