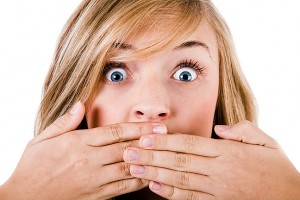 It would seem as though Americans take unpleasant breath pretty seriously—after all, we do spend an estimated two billion dollars a year buying products to mask that stank.

But the often ignored social repercussions of halitosis—the fancy term for bad breath—can be crippling. In one survey, 34 percent of respondents said that bad breath made them hesitant to even speak to other people (another 12.6 percent said they avoided others altogether). Try dating with that kind of pressure.

Even if you don’t have severe halitosis (the kind that you smell on someone sometimes before you even see them), what people may not realize is that half of the adult population suffers from persistent bad breath.

Why do we get bad breath? And most importantly, what can we do to rid ourselves of it? You may be surprised to find that some of the usual go-to solutions may actually be making your breath worse.

Germs We may think smelly foods are often the culprit for bad breath, but in reality, germs that naturally exist in our mouth cause 90 to 95 percent of bad breath. When the germs mix with protein particles, it’s bad news.

And ever wonder why we get morning breath? One reason is, “When we sleep, we produce less saliva than when we’re awake,” explains NYC-based dentist, Jennifer Jablow. “Saliva acts as a buffer to neutralize and wash away bacteria. With less of it, our mouth is dry and the acid level rises, leaving bacteria to produce foul smelling gases.”

You can even blame those gases for your coffee breath, which doesn’t come from the coffee itself. “If you think about it, coffee smells delicious,” Dr. Cohen explains. “Think about those commercials where people wake up with a smile just from the smell of coffee brewing! It’s actually the sulfur gases [in your mouth] combined with coffee that produces that disgusting odor.”

Foods That said, certain foods do produce a bad odor—think garlic and onions and other pungent foods. In fact, when garlic’s potent-smelling sulfur compounds are metabolized, they form something called methyl sulfide, which can’t be digested. Instead, it’s passed through the blood stream to your lungs and skin where it’s excreted. Yup, your skin will smell like garlic. No one knows why but for some people, this smell can last for days.

Dry mouth It may not be the most opportune time to talk to the cutie at the gym after your workout. All that huffing and puffing while you exercise dries out your mouth and can actually cause foul breath.

“When your mouth is not moisturized, you can have bad breath,” says Dr. Jablow. When you consistently have a dry mouth, it’s called xerostomia. The side effects of many drugs such as anti-anxiety drugs, anti-depressants, and even allergy medicines like antihistamines can also produce dry mouth, and hence, bad breath.

Your health People with certain conditions like liver or kidney disease and diabetes tend to have bad breath as well. The build up of wastes in the blood leads to a metallic taste in the mouth that produces the odor. Conditions like acid-reflux (which may be asymptomatic in some people) causes food to regurgitate to the esophagus which mix with bacteria and other enzymes to cause bad breath.

On that point, Dr. Cohen notes that a common myth is that the stomach causes most bad breath. Unless you have a health condition, there actually isn’t constant air-flow between your stomach and mouth.

How to prevent bad breath

Contrary to popular belief, your alcohol-laden mouthwash may actually be making your bad breathworse.

What’s more, The Australian Dental Journal concluded that there is sufficient evidence that mouthwashes with alcohol increase your risk of developing oral cancer, a disease that kills roughly 8,000 Americans every year.

Dr. Cohen adds that those mouthwashes, which claim to kill almost 100 percent of germs, don’t tell you that those germs also rapidly repopulate—within 30 to 60 minutes by most estimates—causing just as bad “rebound” bad breath. In fact, in 2008, the Better Business Bureau concluded that no mouthwash is allowed to claim fresh breath for more than an hour.

The one exception is an alcohol-free mouthwash that breaks up the sulfur-producing process and kills germs to prevent bad breath for up to 12 hours, according to their claims.

Chewing fresh herbs such as parsley, thyme, and rosemary also helps prevent bad odors after a smelly meal. Besides having a more favorable scent, the chlorophyll in the leaves helps neutralize pungent smells. You can also drink more water to keep your breath moisturized.

Another bad-breath killer: “One of my favorite ingredients to prevent dry mouth is xylitol,” says Dr. Jablow. “It’s a sugar substitute found in many gums and dental products that keeps bacteria at bay and helps with saliva flow. or gums

And of course, remember basic oral hygiene: Brushing twice a day, flossing and visiting your dentist twice a year to remove plaque build up, all of which helps to remove bacteria from accumulating under your gum line, which causes bad breath.