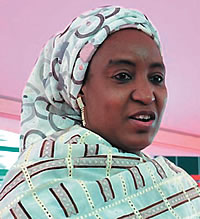 The former first lady who spoke at a memorial lecture in honour of the late president in Katsina at the weekend, also said “the late Yar’adua was not a materialist leader who believed in accumulating wealth. In fact, he shunned material things as his slogan was service to humanity.

“There was a time he said to me that ‘Turai, I pity you because when I die you will have quarrels with my relatives because they will think I have so much money in my possession”, she said.

She said the situation in Nigeria would have been better had the late president survived his ailment because he was a “focused, committed and determined leader”.

“Although my husband was sick for a long time he did his very best for Nigeria. Also as governor of Katsina State, he did his best for the state; he is an honest man who believed in service”, she said.

Extolling his virtues as a leader, Turai said the late President would not give out contract without having the money to pay for it.

“There was a time I approached him that people are complaining that the government was slow. But he said to me people can say whatever they like but I will not give out contract if I have no money to pay.

“The late Umaru was a kind of leader that would go out and monitor projects. I could recall when I used to join him to supervise the projects at Umaru Musa ‘Yar’adua University, Turai ‘Yar’adua Hospital and the roads,” she said.