The maiden edition of Mr Sam Nda-Isaiah Lecture Series in Minna, Nigeeri State, brought to the fore the atmosphere of friendship between former head of state, General Muhammadu Buhari, and former military president General Ibrahim Babangida as the latter conceded the chairmanship of the occasion to Buhari. 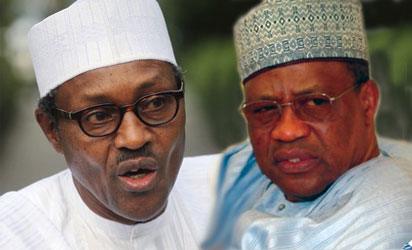 Babangida was reluctant to speak at the occasion as the chairman, but when pressed upon, got up and stated that he could not be chairman in an occasion where Buhari was present.

“I can’t be a chairman at this occasion when General Buhari is here, and this is for two reasons: one he was 5 and I was 6, and those of you in the military understand what I mean; in other words he is my senior. Secondly, he was the head of state before me, so it is my pleasure and honour to formally invite General Muhammadu Buhari to declare this conference open,” IBB said, conceding the chairmanship to Buhari.

Buhari who got up to accept the offer said in the same hilarious mood: “I think that who is a Maradona is always a Maradona; it is very clear to me that General Babangida is the chairman, but since I came in here, he said to me he wouldn’t be the chairman because I was his senior and in the military, things are considered in terms of seniority”.

He, however, added that Babangida, refused to hand over his prepared speech for the occasion.

Buhari congratulated the Mr Nda Isaiah, chairman of Chairman LEADERSHIP Group, for the honour done him by the youths, saying that he deserved it due to his courage and consistency.

According to Buhari, Sam Nda-Isaiah has contributed so much to make sure that truth is told for the best interest of the nation because he has always put government and people in authority in check.