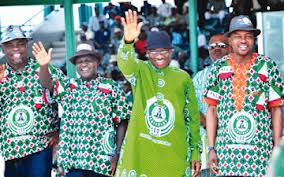 The Congress for Progressive Change, CPC, has lampooned organised labour and President Goodluck Jonathan over the blame game on corruption as witnessed during the centenary workers day celebration in Abuja.

Speaking through its National Publicity Secretary, Mr. Rotimi Fashakin in Abuja on Thursday, the CPC noted that labour’s romance with the Federal Government in the past was the reason Jonathan could accuse members of organised labour of corruption.

Fashakin said, “You will recall that last year January 1, the government of President Goodluck Jonathan increased the fuel price astronomically and labour hoodwinked Nigerians into thinking that they were serious to fight injustice in the land.

“They told us that we should go on strike. Nigerian workers followed the labour leaders. The next thing was when the workers were determined to fight for their rights and freedoms, the same labour leaders frustrated that popular revolt of the people.

“We know that has been the problem; labour leaders have always been used by government in a vary compromising manner.

“At the end of the day, some of them have used their positions to better their lot to the detrainment of the people that they are supposed to be leading.

“That is why the government of the day don’t have respect for them. That is why President Goodluck Jonathan whose government is arguably the most corrupt in Nigeria’s checkered history, will have the temerity to accuse labour of corruption.”