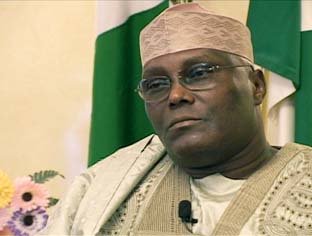 Alhaji Atiku Abubakar has described the current wave of insecurity in Nigeria as worse than the Nigeria Civil War, which lasted for three years.

The former Vice-President said on Friday that the situation was made worse due to President Goodluck Jonathan-led administration’s lack of attention to security of lives and property.

Atiku made this known on Friday in an interview with the Hausa Service of the British Broadcasting Corporation monitored in Kaduna.

He said, “All you see today are security men with guns, which should not be the case.”

He said the dimension of today’s security challenges makes it hard to tackle because the money meant for the purpose had been allegedly stolen.

Atiku said, “To tell the truth, all through my lifetime in Nigeria, I have never witnessed such a deteriorating state of security like what is happening now, it has surpassed even what happened when we fought the civil war.

“But there are reasons for that; first, our governments could not pay attention to the issue of security; secondly, issues of security now are different from what obtained in the past.

“Before, we had different categories of security agents; we had those at the federal level, at the state level and those at the local government level. But within the past few years, you know, this arrangement has been collapsed into one.

“But with the kind of sophistication that is emerging, unless those who understand it are engaged, it will be difficult to resolve all these problems about insecurity.”

“They are unable to pay attention, especially in releasing money for security and training of security agents and buying of security gadgets for the agents to use in the protection of lives and property.

“This money is stolen; in fact, they steal this money….if not, why are we not seeing improvements? We don’t see the security agents today with the gadgets that are necessary for them to work with, we don’t see that.

“The President at that time allowed me to be recruiting about 50,000 policemen every month. We started recruiting them for about two years, and I bought working equipment for the police. But after two years, it was stopped. So, you shouldn’t accuse us. During our tenure, the situation had not deteriorated the way it is now.”