A young girl had her mouth stitched up with fishing cord as part of a sickening campaign of abuse carried out by her own dad, police said. 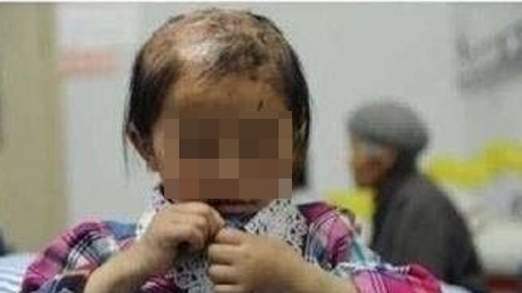 Xiao Li’s father, named only as Yang, allegedly dunked his 11-year-old daughter’s head in boiling water, pierced her skin with sewing needles and hung her upside down to beat her.

He also forced her to kneel on a floor covered in shards of broken glass.

The girl was found May 8, wandering alone and completely disoriented, on the streets of Shichang in China’s southwestern Guizhou Province.

Covered in scars, and with much of her hair missing, she was taken to hospital where authorities said the cost of her medical treatment would be waived, Sky News reports.

Yang was arrested and has reportedly confessed to his crimes.

He said he plunged his girl’s head into the boiling water to try and get rid of lice, reports China Daily.

The girl’s grandmother told reporters that Xiao Li’s parents left home for five years after she was born to find work.

She claims Yang also abused her and that she was powerless to stop it.
Government officials are now seeking guardians to take care of Xiao Li because her grandparents are too old.