Widows Of Slain Policemen Stage Protests, As Police Arrests ‘Rats’ In The Force 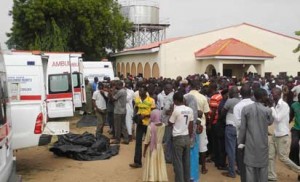 The widows of over 60 policemen who were brutally murdered in an ambush by the Omatse cult members in Nasarawa State, most of them young women, took to the streets yesterday to protest the deaths of their husbands.

The widows who protested along the Akwanga-Lafia highway, wailed uncontrollably, accusing Nasarawa State Governor Alhaji Tankuo Al-Makura of insensibility to their plight. According to them, Al-Makura had not visited them or said anything reasonable since their bread winners were massacred.

They barricaded the Lafia-Akwanga highway to protest the massacre of their husbands, wailing and chanting songs.

The widows were joined by hundreds of sympathizers and together they created a chaotic traffic situation at Squadron 38 Mobile Base, Ubbe Junction, as they blamed the state governor for exposing their husbands and breadwinners to undue risks by sending them on a highly risky assignment, without the requisite intelligence backup.

The highway was blocked with stones, logs of wood and tree branches, just as Okuchku bush path, which should have been an alternative route, was equally blocked, thereby forcing commuters to spend several hours in the scorching sun as the protest lasted.

One of the widows who spoke with Vanguard on condition of anonymity lamented that her children had consistently asked for the whereabouts of their father in the last four days without her being able to provide any response, and that she said had become a bigger burden on her, even than the loss of her husband.

“I haven’t slept neither have I eaten since they killed my husband. The governor of Nasarawa State, has not addressed us. They have refused to release the body of my husband. And nobody is telling us what is going on,” another mourner said. Perplexed travellers who were trapped by the protests were still in their endless wait, as the time of filing this report at about 4 pm.

The delegation from the widows of the slain officers later visited Governor Al-Makura at the Government House, Lafia to express their pain and grievances over the cruel murder of their spouses who they said had served the country faithfully.

Al-Makura sympathized with the widows and assured them that the perpetrators “shall surely be brought to book,” just as he also promised that government would compensate them.

Meanwhile, the Police Commissioner, Mr. Abayomi Akeremale has confirmed the arrest in Lafia, of two police corporals who reportedly gave out information that led to the Nassarawa massacre, said the two suspects were arrested following a tip off.

The ‘rats’ who were part of the 117 security personnel detailed to arrest the Omatse chief priest were said to be natives of the area but they allegedly alerted the cult members who mobilised and laid ambush for the unsuspecting members of the team.

The policemen whose names were given as Corporals Enugu and Haruna Joseph, according to security sources, led the way, described the type of vehicle they would be inside and reportedly told them that they should start firing as soon as their van had passed.

“When we went to search his house, we recovered a lot of arms and charms and as insiders, both took part in the operation. This goes with the saying that the insect that eats cola lives inside the cola. They were the insiders that were giving information about the movement of our policemen.

“There are also some accomplices they were working with but we will start with them so that we can get the others. There was a confirmation that the cache of arms that we were looking for (that led to the massacre) are somewhere and is a threat to the society, not only to the police officers that are trying to maintain law and order but other innocent members of the society and that is how we stake our lives so that other will live,” Akeremale said.