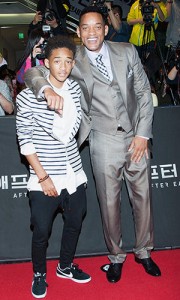 Parents do all sorts of things to incentivize their children — bribes with candy, allowance for chores — but in the case of Jaden Smith, he gets his independence when he’s a bigger star than his dad.

Will Smith and his multi-talented son dropped byEllen DeGeneres’s talk show on Wednesday to promote their new sci-fi flick “After Earth,” and Will took the chance to clear up some talk about Jaden flying the coop.

Turns out a misinterpreted quote was to blame for starting rumors that 14-year-old Jaden was seeking legal independence from Will and momJada Pinkett Smith.

“I think I made a joke in Tokyo,” Will told Ellen of their father-son press tour. “My baby boy, he’s never leaving me ever. No emancipation for the Smith kids.”

Jaden elaborated, adding that he’s got it pretty good at his dad’s place.

“I’m not going anywhere. The thing that people don’t get is that everything at his house is free. I think [I’ll be] there for 20 or 30 more years,” he said.

“[My dad] says as soon as I have a movie that’s bigger than one of his movies then I have to get my own house.”

Sounds like a fair deal. Will you see “After Earth?”