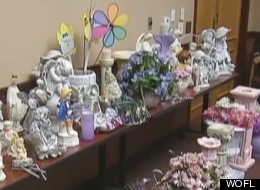 Police say a 57-year-old central Florida woman is a grave robber who stole nearly 150 items that she used to decorate her home.

Statues, lights, planters, decorations and other trinkets pilfered from Mount Peace Cemetery in St. Cloud were allegedly adorning the home and yard of Debra Farinella, the Orlando Sentinel reported.

In all, the middle-aged tomb raider is accused of taking 146 pieces from the burial spots, according to WFTV.

“She was not very particular,” said Officer Chad Durham, spokesman for the St. Cloud Police Department, to WOFL. “She would take them from baby gravesites, as well as adult gravesites.”

A tipster gave police a description of a suspect and a partial license plate number. Police eventually located Farinella, who claimed that she bought the cemetery mementos at a yard sale, the Sentinel reported.

She’s been charged with grand theft and petty theft, according to the Osceola County Sheriff’s office.