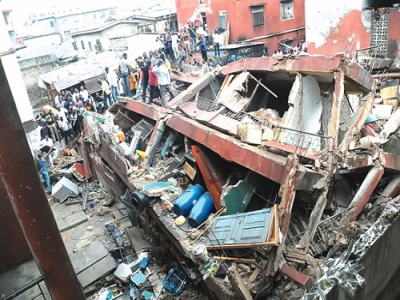 A year-old baby was killed and several others injured on Tuesday when a three-storey building collapsed at Challenge Bus stop, Mushin, Lagos.

He said that victims, who were injured when the building collapsed, had been rescued and taken to Mushin Hospital.

He, however, debunked claims that several lives were lost.

“A three-storey building in Mushin collapsed and killed a 12 months-old baby.

“Several other people who were injured from the impact of the blast have since been taken to the hospital.

“As at the last head count of the occupants of the building, we can safely say that no one is still trapped in the rubbles after the evacuation and rescue process was undertaken,’’ he said.

He urged landlords to subject their buildings to routine structural tests to ascertain their state of habitation.

Frinloye said that the NEMA had so far received report of over 36 cases of structurally defect buildings in different parts of Lagos State. (NAN)