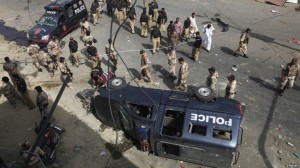 At least 10 people were killed, while nine others were wounded, including a senior judge as bomb attacks rock Pakistan’s business capital Karachi, officials said.

The first bomb targeted Maqbool Baqir, a judge at the high court in the southern province of Sindh, killing at least seven people on a busy street in the port city of Karachi during the morning rush hour.

The bomb, planted on a motorbike, exploded as Baqir drove past with his security detail on Burns Road in the centre of Karachi.

He said one officer from the Rangers paramilitary force was among the dead. Rangers and police were accompanying Baqir, the minister said.

Police said Baqir was in hospital with critical injuries and that his driver was killed.

“Nine people are injured. The bomb was planted on a motorbike and it was detonated by remote control,” he added.

Baqir has a reputation for honesty and has also served as a judge in special anti-terrorism courts set up in Pakistan to hand down quick judgement in terror cases.

Karachi, a city of 18 million people, contributes 42 per cent of Pakistan’s GDP but has been battling a spate of killings and kidnappings besides political violence.

Last year, around 2,000 people were killed in violence linked to ethnic and political tensions in Karachi, the city’s deadliest toll in two decades.

In the northwest, another bomb attack killed the head of a pro-government tribal militia, along with his brother and nephew in Jani Khel, Bannu district, officials said.

“It was a powerful bomb which destroyed the vehicle completely. Malek Hashim, his brother and nephew died on the spot,” a security official said.

Pakistan has for years been fighting Taliban insurgents along its border with Afghanistan.

There was no immediate claim of responsibility for either attack on Wednesday but the Taliban frequently target anti-Taliban tribal elders in the northwest, as well as police and soldiers. [AFP]