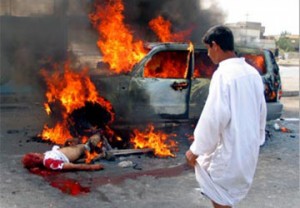 15 people have been killed, while 65 were wounded in a series of car bombs across Baghdad, in the latest deadly violence that has sparked fears of a revival of full-blown sectarian war, officials say.

Eight vehicles rigged with explosives exploded in half a dozen neighbourhoods across the Iraqi capital, an interior ministry official and a medical source said.

The attacks struck across Baghdad on the day Shi’ite Muslims marked Shabaniyah, the anniversary of the birth of Imam Mehdi, the so-called 12th imam, a key figure in their faith.

No group immediately claimed responsibility for the attacks, but Sunni militants have repeatedly targeted Shi’ites, whom they regard as apostates, especially during days of commemoration.

Iraq has suffered an upsurge in violence since the beginning of the year, coinciding with rising discontent among its Sunni Arab minority that erupted into protests in late December.

Sectarian clashes between Sunni and Shi’ite Islamist have intensified in the Arab world, with similar clashes in Lebanon and Syria.

Analysts say a failure by the Shi’ite-led authorities to address the underlying causes of the demonstrations has given militant groups both a recruitment platform and room to manoeuvre.