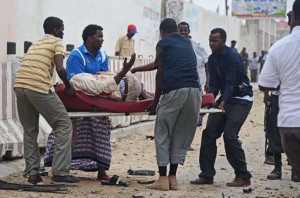 Control of a UN compound in the Somali capital, Mogadishu, attacked by gunmen who killed at least 15 people, has been regained by Somali and African Union forces, officials have said.

The gun battle lasted an hour-and-a-half that followed an explosion at the site killing at least four foreign security staff, the Somali government said on Wednesday.

The al-Shabab armed group claimed responsibility for the attack.

A plume of thick black smoke was seen billowing into the sky after the initial explosion was heard at approximately 11:30am local time (08:30 GMT) on Wednesday.

UN Secretary-General Ban Ki-moon, who is currently in China for talks with the country’s leaders, was “shocked” at the news of the attack, his spokesman said.

“The Secretary-General is aware of the attack against the United Nations in Somalia, and he is shocked by it,” Martin Nesirky, the spokesman, said in an e-mail.

“He is being updated regularly as we get more information from Mogadishu and UN Headquarters in New York.”

A UN official, who cannot be named because she is not authorised to speak to the media, said the attack was against a building just outside the secure airport compound where all the UN agencies were based. The compound includes both residential and office areas. UN staff took shelter in a bunker at the compound.

Nicholas Kay, the UN secretary-general’s special representative to Somalia, confirmed to Al Jazeera that “a complex attack” had taken place at the compound, but that “the vast majority of UN staff” were safe.

“It did begin with an explosion at the main gate followed up by armed attackers entering the compound where they attempted to assault our staff,” he said.

Government-run Radio Mogadishu reported that the attack had started after a suicide bomber blew himself up at one of the gates of the complex.