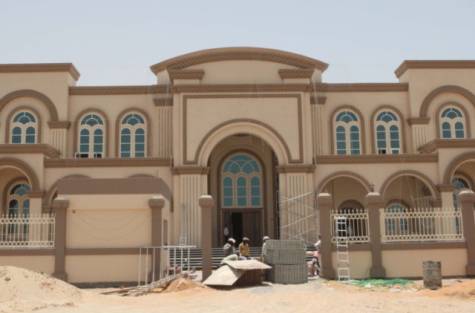 Cardinal Filoni, the Vatican’s Prefect of the Congregation for the Evangelisation of Peoples, will consecrate the 5,000 square metre St Anthony of Padua Church in the Al Jazira Al Hamra district, about 25 km from the city.

Other officials who will attend the event include Archbishop Petar Rajic, Apostolic Nuncio to the Arabian Peninsula and Bishop Paul Hinder, Vicar Apostolic of Southern Arabia.

“This is a great achievement,” said Fr Galdolf Josef, 73-year-old secretary of Abu Dhabi-based Bishop Paul Hinder, of the Dh18.5-million (N.8bn)church. “Ras Al Khaimah is developing quite a bit, especially its industries and tourism, and so is the number of migrant workers. We’re thankful to the Ruler [of Ras Al Khaimah] for giving us the land.”

There are about 6,000 Catholics in Ras Al Khaimah, said the Swiss prelate.

In the UAE there are an estimated 700,000 Catholics who go to 10 churches and served by about 40 priests speaking a dozen languages.

“The church is very much alive here, in Africa and certainly in Asia. All of the members are migrant workers. Besides Filipinos, Indians and Christian Arabs, we have a growing number of Korean Catholics too. Services in rather small churches here are packed, while in Europe, big and beautiful cathedrals are almost empty,” Fr Galdolf said.

The 1,200-seat church can accommodate up to 1,500 worshippers. Two major roads link the new church to Umm Al Qwain, Ajman and Sharjah.

The existing chapel in RAK’s Al Nakheel district, meant for 500 parishioners, sometimes caters to more than 10 times its capacity.

Though the plot was given 2007, it took about five years to raise the money to build the new house of worship.

Filipina hotel executive Janytte Siega, events manager at the upmarket Banyan Tree resort in RAK, said: “I’m happy we have a much bigger place of worship. It testifies to the religious tolerance here. May God continue to bless and bring abundance to the UAE, protect its leaders and people,” he said.

Cleo, a media officer of RAK Free Trade Zone, said: “I’m excited about this bigger church. Last Ash Wednesday, I had to go home, because the existing church was rather cramped – you can’t even get close to the gate to listen to the priest.”

The new structure has a basement hall while two buildings have offices, meeting and catechism rooms and the priests’ accommodation. The church’s consecration ceremony falls close to the feast of St Anthony of Padua (June 13), patron of lost items and people.

A new church is also under construction in Abu Dhabi’s Mussafah industrial district on a 5,000 square metre land granted by the government.

“The UAE,” said Gandolf, “is probably the most open country to Christians in the region.”