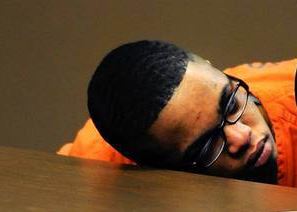 Sixteen-year-old Donald Ray Dokins’ short stature and baby face belie the crime he committed: the fatal shooting of a 1-year-old boy in the arms of his proud and doting father.

As he prepared to sentence the teenager, Los Angeles Superior Court Judge Pat Connolly could barely contain his contempt.  “You have no intestinal fortitude to sit up and look at me,” Connolly said to Dokins, who was staring at the floor, avoiding the judge’s gaze. “You have hatred in your heart that I can’t understand.”

Prosecutors say that on June 4, 2012, Dokins, a then-15-year-old gang member, rode up on a bicycle to a family gathered outside a home in Watts. He drew a revolver and opened fire, killing 14-month-old Angel Mauro Cortez Vega and wounding his 21-year-old father, Mauro Cortez. Dokins, authorities say, mistakenly believed the father was a member of a rival gang because of the color of his T-shirt.

Prosecutors charged Dokins as an adult. Connolly sentenced him to 90 years to life in prison.  Before the sentencing, friends and relatives of both the victims and Dokins addressed the court.  Dokins’ brother Derrick Washington described his sibling as a straight-A student who wrote poetry. Washington broke down in tears, asserting his brother’s innocence.  “He’s not a monster.

He’s just a little boy,” said Washington, wearing a rosary around his neck.  Another family member told the judge that Dokins wouldn’t be around to raise his own daughter, who police said is close to the same age as the child he killed.