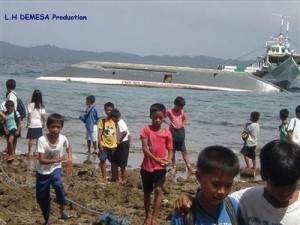 Two were killed, fifteen others remained missing, and 50 were rescued after a passenger ferry sank while aboard a roll-on, roll-off ferry, off central Philippines at dawn of Friday, officials said.

Fishermen on small outrigger motorboats were among the first to arrive on the scene and saved many lives, said local coastguard deputy chief Bayani Belisario.

“They [the passengers] were floating in their life jackets and the rescuers picked them out of the water,” Belisario said
He said several people from the sunken ship were also able to make the long swim to the shores of Burias on their own.

A navy plane and a coastguard ship, diverted from taking part in maritime exercises in Indonesia, joined the search.

Coast guard volunteer Amadeo Tan said that his wife, who was on the ship, called him by her mobile phone to say the boat had sank.

“She was already floating in the water. I did not think twice and we rushed to the site,” said Tan, a resident of Masbate island, the ferry’s destination.

Tan said his group rescued dozens including his wife, who was unhurt but left traumatised by the incident.

Local fishermen who immediately went to the site of the sea mishap, members of the Philippine Coast Guard, and a plane dispatched by the Philippine Navy helped in rescuing more than 50 passengers, including Lauro Mateo, the ship’s captain said.

They were all brought to municipal health centre of Aroroy, in Masbate, said Habibon.

Narrating what happened, Mateo, the ship’s captain, told GMA News online: “The ship went around. Not all the passengers were given life jackets because [the ship’s listing and everything else happened so fast]. Each of us were on our own. The sea was so deep.”

The ship which was on a roll-on and roll-off ferry, sailed on a calm sea, then it listed at two kilometres off Burias Island in Masbate, at five in the morning, when it was 14 kilometres away from its destination, Aruroy, said Mateo.

With two buses and two trucks, it left Pio Duran, Albay in the Bicol region at two on Friday morning.

It was not overloaded, but authorities claimed that several names were not included in the ferry’s manifest.

Another source told Gulf News that a bus that was carried by the roll-on, roll-off ferry was not properly lashed and it collided with the passenger ferry.

A roll-on, roll-off ferry is a common means of transportation for people, vehicles and cargo from island to island in the country’s 7,100 islands.

Sea accidents are common in the Philippines. They are blamed on authorities who are lax with shipping procedures and ships for overloading and lacking in safety standards.

In 2008, 800 were dead when a ferry capsized during a typhoon off the central Philippines.