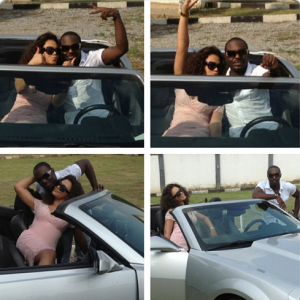 Probably in an effort to shut down rumors of them having relationship issues or critics saying the relationship is fake; actress Nadia Buari and co-actor Jim Iyke have taken a couple of really hot photos together.
Earlier yesterday, Nadia Buari had come on twitter and tweeted a bit about love, some fans thought that her romance with Jim Iyke was hitting rock bottom but this new photo just shows the opposite.
She uploaded the above photo on twitter with the caption: #Life is a beautiful journey for all those who are willing to #live and #love!