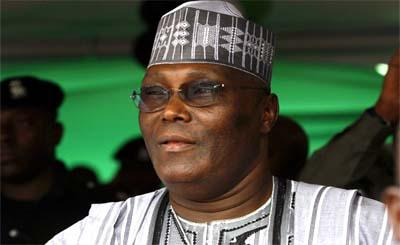 As the proposal by the Chairman of the Peoples Democratic Party, PDP Board of Trustees, Chief Tony Anenih, that the party should give automatic tickets to President Goodluck Jonathan and state governors in 2015 receives consideration, former Vice President Atiku Abubakar has rejected the move insisting that the President must present himself for the primary election of the PDP.

In a statement by his media office Saturday, Atiku said PDP must carry out a transparent and fair process of primary where the president will participate like any other party member, just as he was quick to acknowledge that Jonathan is entitled to seek the party ticket in 2015.

He maintained that “My position remains that as far as PDP Constitution is concerned, any attempt to change the party’s rule to favour the President as a sole candidate in the event of his willingness to re-contest is unconstitutional. The contest should be open to all desiring to pursue an ambition on the platform of the PDP.”

Atiku said that by foreclosing free and fair process of selecting its presidential candidate, PDP might be sending the wrong message to Nigerians about its commitment to conduct free and fair elections for the entire country.

The former Presidential candidate of the Action Congress of Nigeria, ACN, also rejected the party’s policy of “consensus arrangement” and “adoption” rather than transparent elections to produce candidates for all elective offices, including the presidency.