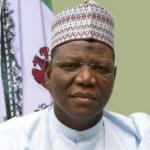 Much touted presidential hopeful and Governor of Jigawa state, Alhaji Sule Lamido, has declared that the Peoples’ Democratic Party (PDP) is a large party and anyone of its members can become President in 2015.

Lamido, who is widely believed to be nursing a presidential ambition in 2015, was speaking in an interview with Channels Television where he narrated his chances of clinching the PDP ticket for the forthcoming general elections.

He said, “Anybody in the PDP can become the President,” adding that “It can be me; it can be Jonathan or anybody”.

Lamido, a former Minister of Foreign Affairs in the Olusegun Obasanjo administration, also restated his firm belief in the democratic tenets of nomination just as he said it will be selfish and arrogant of him if he declares such an ambition without the essential nomination by his people.