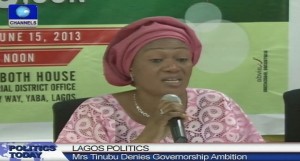 Former Lagos State First lady, Senator Oluremi Tinubu has denied nursing the ambition to run for the Lagos governorship seat in 2015 saying the task of governing Lagos is enormous and not one for the tender-hearted.

At a media parley in her constituency office in Yaba, Mrs Tinubu, who is representing Lagos Central in the upper chamber of the National Assembly, said “It’s never my ambition to run for the governor of Lagos. My husband did it, remember? For eight years; I’m not an outsider to it.”

Driving her point further home, she said, “Lagos is not a place for one with tender heart to govern. People outside may not know what it requires to govern a state with well over 20 million people and people still walk in everyday in thousands refusing to go back to their villages.

“Even the main opposition party (PDP) that said they want to capture Lagos know that Lagos is a different state among the 36 states in the federation. You must build on what your predecessor has put in place to make an impact. There is a lot to be done in Lagos. It is a former capital of Nigeria and till today, Lagos remains the commercial nerve of the country. Nobody can take that away from the state. The attendant challenges before Lagos requires highly energetic individual to succeed Governor Babatunde Fashola, ” the Senator said.