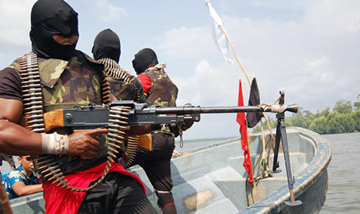 President Goodluck Jonathan’s purported second term ambition will not receive the backing of former lords of the creeks across the Niger Delta who have threatened to frustrate his bid should he eventually decided to run for President in 2015.

The ex-militants are particularly piqued at the way the Presidential Amnesty Programme has been executed and have vowed to return to the creeks to eke a living if their grievances are not met in a few weeks time.

The position was made known in a statement issued in Warri, Delta State, on Wednesday, by a former lord of the creeks, General Godday Smith (aka Bounanawei – gods of the Niger Delta).

Bounanawei slammed the Special Adviser to the President on Niger Delta and Chairman, Presidential Amnesty Programme, Honourable Kinsgley Kuku, whom he accused of consistently deceiving and breaking agreements reached between him and his boys, who he said are now under the throes of biting hunger and deprivation, despite the façade of a successful amnesty programme being touted by the Federal Government.

In his words: “Mr President, do not allow anybody to deceive you, you must know that lasting peace cannot be guaranteed in Niger Delta region until all ex-militants and youths across the Niger Delta region which embraced the amnesty and surrendered their arms are carried along and empowered to directly benefit from the amnesty programme”.

Continuing, the ex-militant said: “I am afraid Mr President, it will surprise you to know that 80 per cent of the ex-militants that have not benefitted in the amnesty programme are not happy with your administration, because they cannot have you from the Niger Delta as president and yet not benefit from a programme initiated and left behind for you by late Alhaji Umaru Yar’Adua, who wholeheartedly meant well for all the Niger Delta youths.”

Alleging that the programme was a deceptivewool, he added: “Mr President, the continued deceit in the President Amnesty Committee, if not quickly addressed, may hinder your perceived presidential ambition come 2015, as aggrieved ex-militants are already mobilising to frustrate your re-election bid, the truth is bitter, but must be said.”

Bounanawei recalled that on June 25, 2009, when late President Yar’Adua granted unconditional amnesty to the then militants in Niger Delta, the laudable initiative was to ensure that all youths involved in the act of militancy and related offences in the region were transformed, made self-reliant and useful to themselves and society at large.

Bounanawei, who alleged that Honourable Kuku and others handling the programme had turned it into a personal company and are now running it as their estate, warned that if returning to the creeks is what would guarantee his sustenance and that of his boys, they would not hesitate to do so since the only language government understand was violence.