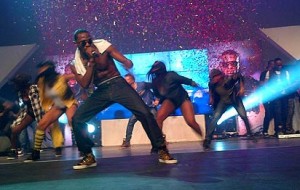 Victoria Island, Lagos, glowed bright-red last night Sunday June 23rd as D’banj hosted thousands of fans to his much talked about DKM Concert which held at the Eko Hotel and Suites.

However, 2face, Wizkid, Ikechukwu, Durella and DB Records JSol didn’t grace the stage despite earlier announcements of their performance at the concert.

Wizkid was sighted at the event but didn’t get on stage. 2face we gather is in Houston US for a performance at Industry Nite. Ikechukwu, Durella and J Sol cannot be accounted for.

The show was hosted by The Beat FM’s Toolz and comedian AY with an earlier backstage voice over from Illryhmz.