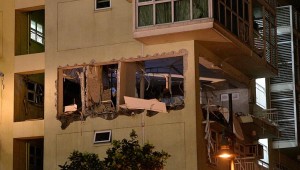 An explosion in a luxury apartment building in Manila, the capital city of Philippines, has killed three people on the street below, the government has said.

The explosion which happened late on Friday from an unknown source knocked out the wall of the a fifth-floor flat, sending a huge chunk of rubble hurtling to the street where it crushed a delivery van, killing the three men inside.

According to Philippine Interior Secretary Mar Roxas, authorities were still trying to assess what had caused the blast, in an upper-class development known as “the Fort”, but initial investigations found no evidence of a bomb.

“We still have not seen any triggering device of any kind among the debris,” Roxas said hours after the explosion in a fifth floor unit in the high-end complex, while sniffer dogs had found no sign of explosives.

Roxas said the explosion injured five other people. The complex had been evacuated while it underwent an inspection, he added.